The official Twitter account of Podrobnosti.ua, one of the leading online news site in Ukraine, has been hacked at midnight, Feb 17, 2014, by anonymous users.

Two tweets, that indicate the hacking of the account, were published on 12.36 am and 2.12 am respectively.

The first one said: “We are the most lying news”. The second one was an appeal to pro-government oligarch Dmytro Firtash, an owner of U.A. Inter Media Group Limited, a media holding that operates dozens media resources, including Podrobnosti.ua site. The tweet said “D.V. Firtash, unfortunately, you run out of funds to continue publishing lie on this resource.” 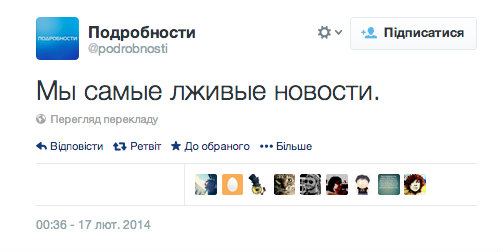 Many Twitter users have retweeted those messages, wondering what were the reasons of publishing tweets. Some asked if the account was hacked.

Compared to other leading news resources, the edition of Podrobnosti.ua do not pay much attention to Twitter as a tool to inform audience. Twitter of Podrobnosti.ua had just 2402 followers on the time of hacking. It followed none users. Meanwhile, Twitter of Ukrainska Pravda had 97,000 followers, Liga.net – 61,200, RadioSvoboda – 54,500.