Russian informational agency ITAR-TASS, one of the oldest in the world, has turned to be a propaganda machine of the Russian government. During the Russia’s aggression against Ukraine, ITAR-TASS disseminates false news, in particular, the one, that Ukrainian government ordered to delete Russian-language pages of official sites in Ukraine. Those so called news are absurd and are not proved by any sources.

Recently, Ukrainian journalists have launched at least two sites that analyze fake news and false from Russian media – stopfake.org and fakecontrol.org. Nevertheless, Russian media continue to lead informational war against Ukraine by means of all government-controlled media by disseminating false and propaganda. It worths to admit, there are many balanced news from independent Russian Internet sites, in particular: www.novayagazeta.ru, www.vedomosti.ru, www.themoscowtimes.com, www.gazeta.ru 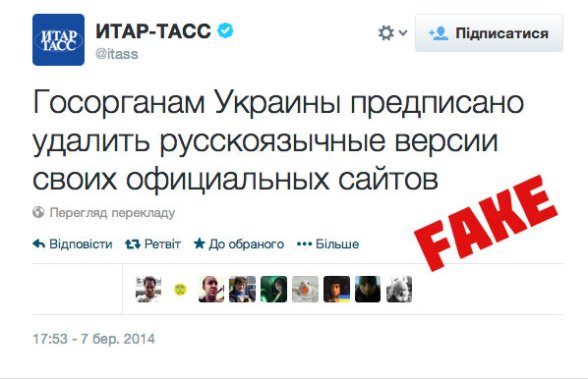