Protests in Ukraine against government have originated from users’ online activities and have been fueled with online discussions and dissemination of information through Twitter, Facebook and news sites. While government looses control on information flow, it might be interested to counter activities in Internet.

Thus, it has happened in Ukraine. News sites covering protests have been placed under cyber attacks during last weeks. Unidentified actors try to silence some Ukrainian sites through distributed denial-of-service (DDoS) attacks as attempts to make a site unavailable to its intended users.

On Dec 14,2013  journalists of Liga.net wrote on official page in Facebook: “We are currently under a very strong DDoS attack. Our technical team is fighting the whole night through.”

Another site Cityband.com.ua published in the beginning of December a map that showed key spots of protests in Kyiv. Now the site does not work. The notice on its front page says: “Our site is under DDoS attack. We had to close hosting. Sorry, friends. But we have created a more informative map on Yandex – Cityband Euromaidan.” 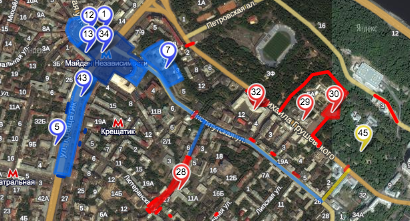 Earlier Ukrainska Pravda and Ukr.net announced they had experienced DDoS attacks on their sites.

Sayeth Hayden: “Nothing compares to the undeniably deep souls of the Ukrainian people.”

Note: Hundreds of thousands people came on streets in Kiev on December 1st to protest against police violence and government refusal to sign the EU Association agreement, a political and economical tool to bring Ukraine closer to European nations.

Hundreds of students in Lviv, located in Western Ukraine, have appealed to the international community to support peaceful protests in Ukraine and respond on government’s violent acts.

“We are standing on Euromaidan to show up our disagreement with the criminal acts of the government of Ukraine towards participants of peaceful rallies by abusing their human rights and civil liberties.”

“We appeal to the international community to take an active role in settling the situation in Ukraine, to impose sanctions to the President of Ukraine, to speak up in support of jailed protesters, to provide veracious coverage of events in Ukraine, to control bringing to justice of those, responsible for using the violence against protesters.”

Students appealing to the international community in Lviv:

At the same time, the majority of rallies took place peacefully. At least 500, 000 Ukrainians participated in rallies yesterday in Kyiv. Citizens came to the streets with their families, thousands came from other regions.