If social media is indeed changing the ways in which protests emerge and evolve, then what is learned about the Ukrainian situation will provide important lessons for understanding and anticipating political developments all over the world.

.
The authors suggest to view the impact of social media in Ukraine in three main dimensions, focusing on the use of #euromaidan / #євромайдан hashtags and Facebook updates:

First, social media can help to build a protest movement, and it can do so with remarkable speed. Second, once a movement exists, social media can play an important role in recruiting new members and encouraging participation. Third, once protests are in full swing, social media can spread information about them.

The interest of researchers for the impact of social media use in Ukraine in 2013-2014 remains high and leads to new publications from worldwide aiming to undestand the nature of social media interaction as a vibrant medium of public discussions and self-organization. Just to remind, in Boston, in May 2014, I have published my thesis about the role of social media in news gethering in Ukraine.

The rise of social media use regarding the events in Ukraine showed remarkable numbers. Twitter,  an online social networking and microblogging service that enables users to send and read short, 140-character text messages called “tweets”, was the fastest way to learn news about the recent events in Ukraine.  In the period of February 10-March 12, 2014, 3,785,648 tweets with the hashtag #ukraine were written by users of Twitter. With the outbreak of the Crimean crisis, the interest in Ukraine on Twitter was comparable to the interest in the 86th Academy Awards ceremony.  END_OF_DOCUMENT_TOKEN_TO_BE_REPLACED

On May 30, 2014, at Emerson College, Boston, I have defended my thesis titled Agenda setting in newsgathering during anti-government protests 2013-2014 in Ukraine. The impact of social media on news organizations. Chair – Prof. Melinda Robins, Ph.D., Graduate Program Director of Journalism Department at Emerson College.

I plan to publish it on this blog soon, now, please find the abstract:

Following the Orange revolution in 2004, popular protests of Ukrainian citizens in 2013-2014 for the second time in the last ten years altered the political regime in the country. In the battle against the corrupt government, protesters have demonstrated a sophisticated use of the Internet and social media tools in news dissemination and mobilization of activism. This study investigates another dimension of the protests – the media effects of social media on news organizations within the framework of agenda setting theory. How user-generated content influenced media coverage of the protests by professional news sites and which issues have been perceived as important for public awareness. Based on a case study of one of the leading news sites and a popular Facebook page initiative, I research the agenda setting on the mainstream media. 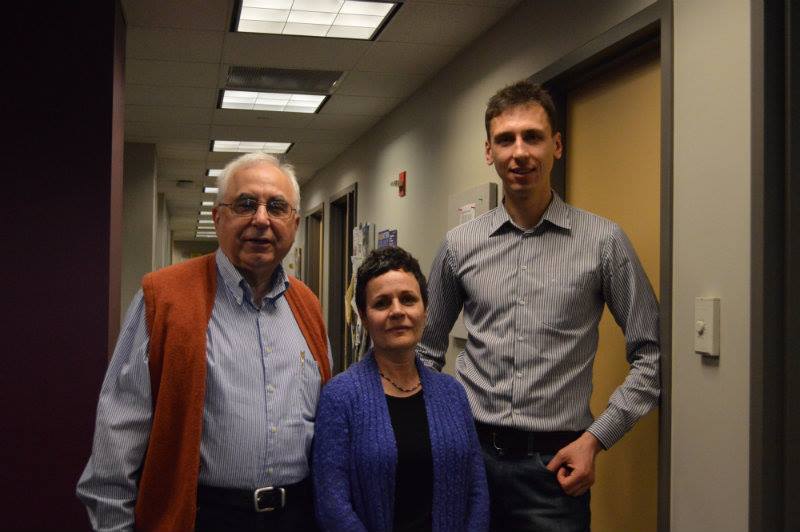 Yulia Marushevska, a student from Kyiv, who participated in anti-governmental protests in Ukraine, became famous in the West due to the one video, posted in YouTube. Marushevka appeals to the world, explaining why Ukrainians were fighting against government. The video came viral – it got 7,990,000 views as far as April 5, 2014. Now Yulia is on tour in Canada and the States. She was invited by TV channels, city councils, think tanks and universities to talk about Ukraine and the protests. On April 8, Yulia gives a presentation at Stanford University. On April 13-15 she is visiting Boston.

The effects of viral video “I am Ukrainian” appeals ideally to the Western audience since it demonstrates personalization of the protests in Ukraine.  Yulia stands as an ideal hero – she is a protester, she is young and passionate, she speaks simply and sincerely and  the language she talks is English. She is a direct victim of the drama, also her family members participated in protests. She symbolizes a new generation of Ukrainians – she is English-speaking, devoted to the civic values and is in the list of young professionals.

At the same time, some authors mention the controversy of the video.. Yulia as a hero is too perfect to be real. Her message shows the developments in Ukraine in black and white, silencing the violence from protesters. 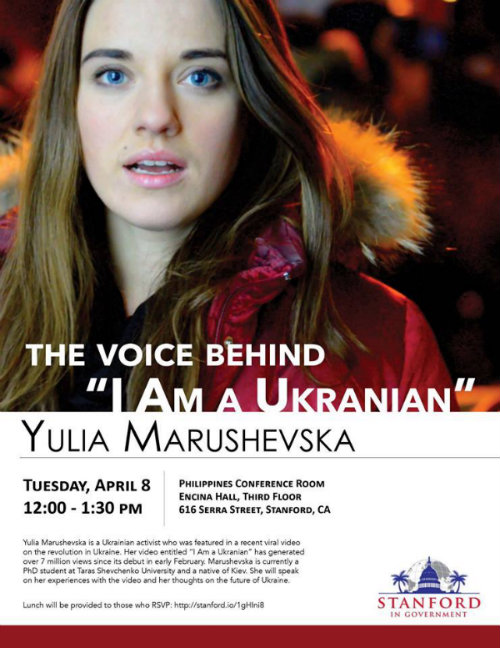 A discussion at Stanford University

Another video, filmed by Ben Moses, posted by a user “Yulia Marushevska”, dated Dec 06, 2013, explains more about the protests in Ukraine. The caption states:

Finding myself in the epicenter of the protests – often referred to here as a revolution – I decided to interview some of the people in the streets. There is one factual error: the heavy outpouring of people into the streets occurred over several days after the beatings, not immediately the next day. 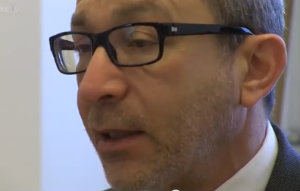 Ukrainian politicians, especially representatives of ruling Party of Regions, demonstrate their blindness towards the impact of social media on political life in Ukraine. Media appearance of Gennadiy Kernes, a mayor of Kharkiv, the second largest city in Ukraine, is a case.

Kernes, a well-known supporter of President Yanukovych, is famous with his roughness and boorishness towards journalists, political opponents and his colleagues in Kharkiv City Council. For example, in 2012 during a council meeting Kernes as a major addressed to one of state officials, responsible for housing services in Kharkiv, with the words: “Hey you, Kondaurov, a son of the bitch, if you are irresponsible to your obligations, I will multiply you by zero.”

In the end of Jan 2014, Mustafa Nayem, a journalist of Hromadske TV, interviewed Kernes regarding the political situation in Ukraine. The tone of Kernes’ statements was intolerable, the politician abruptly attacked his political opponents, did not answer on journalist’s direct questions regarding government responsibility for the violence and political crisis in Ukraine. Also, Kernes jumped to the discussion of sexual orientation of journalists, personally insulting some of them.

The interview lasted for 1 hour and 20 minutes. Nevertheless, it attracted a huge attention of the audience – tens of thousands viewers watched it during live air and later it has got 232,000 views in YouTube.

Internet users massively reacted on Kernes’s roughness – they wrote in Facebook and Twitter, expressing their emotions and feedback.

What Kernes is talking now, would be a political suicide in any civilized country – Stanislaw @stas8t

Kernes got crazy. That’s all. I have no words – Yasya Krayevskaya @yaassyya

Kernes is not able to answer any question #ΣVROMAIΔAИ (@evromdn)

Kernes’ interview brought immediate media attention – is has been widely discussed in Ukrainian Internet by thousands users. The overview of users’ tweets on Kernes, published in Storify, collected almost 89 000 views during a week.

Kernes is also known by his addiction to Instagram where he posts photos from gym and restaurants. He does not care to use vulgar language whole commenting his opponents and critics.

Ukrainian and foreign journalists are under police attacks in the heart of Kyiv, where the protests against the government continue. Riot police has already targeted more than 30 journalists, who were injured by rubber bullets and gas grenades. As a result, some journalists have been seriously injured.

Vyacheslav Veremiy, a correspondent for Vesti.ua was injured  by police on Jan 20 and hold a surgery on his left eye. He might need another surgery and doctors do not guarantee his eyesight recovery. Vesti.ua, a pro governmental online site, where Veremiy works, still publishes partisan news regarding the protests, accusing protestors of “beating police”.

Unidentified Russian correspondent was injured during his live broadcast on Jan 20 (see video). The grenade exposed behind him, injuring the journalist and knocking him down. The video also shows protesters carrying the injured to the ambulance:

The protests against government have been continuing for two months. The main cause of protestors are to dismiss key state officials, to free political prisoners and to withdraw a set of repressive laws, adopted on Jan 16, 2014.

On Thursday, Jan 16, 2014, the Ukrainian Parliament has illegally adopted amendments to the Criminal Code and they have been immediately signed by the President of Ukraine. The initiative targets civil society and participants of #euromaidan by imposing sanctions for peaceful protests and activities of non-government organizations. Government also protects police. According to the amendments (translation by Iryna Lysenko):

– participants of peaceful protests and demonstrations that took place without the permission of police can be arrested for up to 15 days;

– blocking of state buildings is punished by up to 5 years of imprisonment;

– cars which move in a convoy of more than 5 vehicles can be confistaced from their owners;

– collecting personal information about policemen, judges and other state agents – such as facts from their biography where they lied under oath, accepted bribes, beat up or killed (yes, we do have murderers who are still judges) – can lead to arrest for up to 6 months;

– NGOs that receive grants from any foreign state/fund/organization/individual and that take part in ANY kind of political activity in Ukraine are now considered “foreign agents”, must register as such, are taken away their non-profit status and taxed by new, complicated procedure.

The graphics, prepared by Chesno, summarize the threats for the civil society in Ukraine:

Sayeth Hayden: “Nothing compares to the undeniably deep souls of the Ukrainian people.”

Note: Hundreds of thousands people came on streets in Kiev on December 1st to protest against police violence and government refusal to sign the EU Association agreement, a political and economical tool to bring Ukraine closer to European nations.

Ukrainian investigative journalists called the governments of the US and EU countries to use anti-money laundering standards of FATF against the family of the President of Ukraine. According to journalists‘ findings, Yanukovych’s family is involved into corruption schemes that bleed the economy of Ukraine.

The journalists request within the governments the following:
1. Law-enforcement agencies in the EU and the U.S. shall immediately freeze accounts of Viktor Yanukovych, his son Oleksander and companies of which they are beneficiary owners. Freeze correspondent banking accounts, used by business structures and affiliated financial institutions of the Yanukovyches to get access to the world finance market.

2. Financial institutions of the EU and the U.S. shall terminate serving businesses, which might belong to Viktor Yanukovych, his family members, in particular Mr. Oleksander Yanukovych, and their associates. Read the full statement and see graphics on: www.yanukovich.info

Protests in Ukraine continues for the third week, since Nov 21. Protesters demand the changes of political regime. Follow the news from Ukraine through Twitter – #euromaidan

Hundreds of students in Lviv, located in Western Ukraine, have appealed to the international community to support peaceful protests in Ukraine and respond on government’s violent acts.

“We are standing on Euromaidan to show up our disagreement with the criminal acts of the government of Ukraine towards participants of peaceful rallies by abusing their human rights and civil liberties.”

“We appeal to the international community to take an active role in settling the situation in Ukraine, to impose sanctions to the President of Ukraine, to speak up in support of jailed protesters, to provide veracious coverage of events in Ukraine, to control bringing to justice of those, responsible for using the violence against protesters.”

Students appealing to the international community in Lviv: