If social media is indeed changing the ways in which protests emerge and evolve, then what is learned about the Ukrainian situation will provide important lessons for understanding and anticipating political developments all over the world.

.
The authors suggest to view the impact of social media in Ukraine in three main dimensions, focusing on the use of #euromaidan / #євромайдан hashtags and Facebook updates:

First, social media can help to build a protest movement, and it can do so with remarkable speed. Second, once a movement exists, social media can play an important role in recruiting new members and encouraging participation. Third, once protests are in full swing, social media can spread information about them.

The interest of researchers for the impact of social media use in Ukraine in 2013-2014 remains high and leads to new publications from worldwide aiming to undestand the nature of social media interaction as a vibrant medium of public discussions and self-organization. Just to remind, in Boston, in May 2014, I have published my thesis about the role of social media in news gethering in Ukraine.

The rise of social media use regarding the events in Ukraine showed remarkable numbers. Twitter,  an online social networking and microblogging service that enables users to send and read short, 140-character text messages called “tweets”, was the fastest way to learn news about the recent events in Ukraine.  In the period of February 10-March 12, 2014, 3,785,648 tweets with the hashtag #ukraine were written by users of Twitter. With the outbreak of the Crimean crisis, the interest in Ukraine on Twitter was comparable to the interest in the 86th Academy Awards ceremony.  END_OF_DOCUMENT_TOKEN_TO_BE_REPLACED

All the so-called peaceful negotiations were a well-planned trap. They were aimed to delay time and to prepare power operations against protesters. Yanukovych did not plan to make any concessions from the beginning. All those ‘dances’ around the political process, backroom negotiations on amendments to the Constitution – were intended only to lure protesters in trap.

Today’s day was a well-planned and directed by at least a week ago. Right now Kyiv subway doesn’t work, and all entrances to Kyiv are locked. In Kyiv, at least in some places (for example, hostel KPI) the internet is off. A state of emergency will be imposed in Kyiv in a few hours and do not tell me that all this was done without any preparation, plan and investigation. END_OF_DOCUMENT_TOKEN_TO_BE_REPLACED

We, representatives of Ukrainian Fulbright community, are deeply concerned about the article of Nicolai N. Petro, professor of politics at the University of Rhode Island, published in the National Interest, defending recent laws enacted by the Verkhovna Rada (parliament) of the Ukrainian government. Here is the link to the article.

We believe that as an American citizen who has the freedom to express himself, Mr.Petro is taking advantage of that freedom in expressing his views in his above mentioned article. By defending the unconstitutional laws passed by the Verkhovna Rada, however, Mr.Petro is denying this freedom to every Ukrainian citizen.

We believe that it is Mr.Petro, not the US government who seriously misreads the situation in Ukraine. Mr.Petro has provided no arguments to refute that the government of Ukraine is responsible for the escalation of violence there. If one has been following the protests closely, then he/she must have seen that the protests were peaceful until the events at Hrushevskoho street provoked a violent response to the government crackdown; accordingly, it could not be that such a response was the strategy of the opposition from the beginning, which Mr.Petro, quite mistakenly, claims to be the case. As a scholar, by making statements like that, Mr.Petro needs at least to cite sources, from which he derives his information. END_OF_DOCUMENT_TOKEN_TO_BE_REPLACED

On Jan 26, 2014, three hundred representatives of Ukrainian community in Massachusetts, including Ukrainians from Providence, New Hampshire, Rhode Island and Connecticut conducted a rally in support of protests against the government and police brutality in Ukraine. Participants called President Yanukovych to resign, blamed Yanukovych and police for violence against protestors and called the US government to impose “sanctions for dictators.”

The rally was held in front of The Massachusetts State House. Participants were singing Ukrainian anthem and called for the future for Ukraine. One of the poster claimed “We protest here, because it is illegal to protest in Ukraine.” Later, being accompanied by drums, protesters walked to the Faneuil Hall by the Freedom Trail. They were disseminating the leaflets about Ukrainian protest to raise awareness among citizens of Boston. Since Feb 6, Ukrainian community in Boston will start conducting Ukrainian Social – a monthly networking event for Ukrainians living in Boston and Massachusetts. 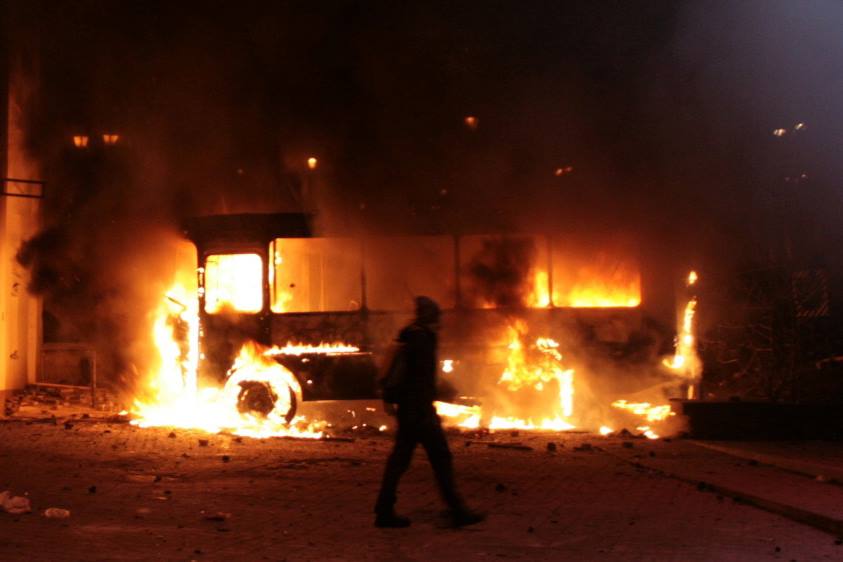 On Thursday, Jan 16, 2014, the Ukrainian Parliament has illegally adopted amendments to the Criminal Code and they have been immediately signed by the President of Ukraine. The initiative targets civil society and participants of #euromaidan by imposing sanctions for peaceful protests and activities of non-government organizations. Government also protects police. According to the amendments (translation by Iryna Lysenko):

– participants of peaceful protests and demonstrations that took place without the permission of police can be arrested for up to 15 days;

– blocking of state buildings is punished by up to 5 years of imprisonment;

– cars which move in a convoy of more than 5 vehicles can be confistaced from their owners;

– collecting personal information about policemen, judges and other state agents – such as facts from their biography where they lied under oath, accepted bribes, beat up or killed (yes, we do have murderers who are still judges) – can lead to arrest for up to 6 months;

– NGOs that receive grants from any foreign state/fund/organization/individual and that take part in ANY kind of political activity in Ukraine are now considered “foreign agents”, must register as such, are taken away their non-profit status and taxed by new, complicated procedure.

The graphics, prepared by Chesno, summarize the threats for the civil society in Ukraine:

On Wednesday, Dec 18, Ukrainian community in London will held another rally in front of house of Ukrainian billionaire Rinat Akhmetov, located in One Hyde Park. 100 Knightsbridge, London, SW1X 7JL. The first rally in London took place on Dec 8, 2013.

Protesters will address Rinat Ahmetov to withdraw his support to President of Ukraine Yanukovych taking into consideration the violence, government used to protesters on Nov 30 in Kyiv. The rally is one of the methods of nonviolent resistance against the political regime of Yanukovych. According to Ukrainska Pravda, Ahmetov controls up to 50 members of Ukrainian Parliament making a decisive role in legislation process. On the other hand, Ahmetov’s reputation as an economical mogul is very sensitive in the eyes of international community. His backing of corrupted government brings question to Ahmetov business partners globally.

Two weeks ago, Ukrainian investigative journalists have published the corruption schemes of Yanukovych’s family. Journalists’s findings argue, that Ukrainian economy looses from $5 Billion to $10 Billion annually due to Yanukovych’s corruption.