Office of BSHC is located in NonProfit Center Building in Boston. (Photo by Vitalii Moroz)

One day a hotline operator of Boston Senior Home Care, a service provider for elderly, got a call from 65-year-old Boston resident with an extraordinary request. The man asked if the agency would help him find a girlfriend.

In November 2012, BSHC got 675 calls from senior citizens, most of which were straightforward referrals. People asked the organization for help to prepare meals, provide legal services, shovel snow, get a haircut or protect them from financial, verbal or even physical abuse.

BSHC is one of the three biggest organizations that provide assistance for elderly people living alone in Boston. Established in 1974, the organization for almost 40 years has assisted senior citizens in fulfilling their primary needs. “Most of our people are 70 and over,” says Linda George, an executive director of BSHC.

According to US Census Bureau data (www.census.gov)

The organization targets elders and people with disabilities who make a choice not to go to a nursing home. “We believe people should be self-directed, and if they want to stay at home, we should be able to provide them with the services at the same level of cost that would be available in some sort of long-term care facility,” George says.

Over the years BSHC has built strong ties with Boston’s senior citizens. Sometimes clients prefer calling its elder hotline instead of calling the police in an emergency. “A lot of people just do not want to call 911, so they call us and we refer them to protective services,” says Lisa Burton, a hotline operator for Boston ElderInfo, one of BSHC’s services by.

BSHC serves over 5,100 seniors in Boston, primary those with low incomes. Linda George explains, “In general we serve low income elders, 60 years old and older, that have functional impairment levels that meet our criteria for service.We do not serve people that can take care of themselves. We don’t serve people that are over income for in-home services since there are certain programs they are eligible for.”

As many seniors meet their end of life at home, the death with dignity initiative, raised during this year’s election, targets BSHC clients as well. Some of them are people with disabilities, and the organization directs its efforts to helping them as well. Yet the majority of BSHC clients might not be terminally ill. Those elderly who face terminal illness will be advised to use hospital or hospice services.

Yet, the majority of BSHC customers are those individuals whose life expectations go beyond hospitals. According to George, BSHC primary focuses on patients’ life issues. “We do not treat diseases, we look for functions. Can you function? Can you get around in your house? Can you make a meal for yourself? Are you safe at home? Are you in a situation when you might need protective services? Are you in a kind of danger?” says George. 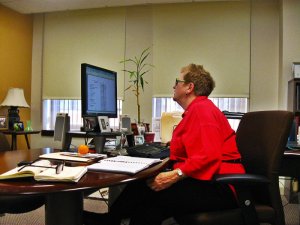 George describes its client as a person who faces some sort of domestic issue. “If you have trouble breathing and it affects you from being able to do meal preparations – that is what we are looking for,” clarifies George.

To serve 5,100 elderly citizens and maintain the office with 150 employees, BSHC relies on state budget funds. George states, “We get most of our funding from the state. We started with a budget, I think, under $1 million and now it is about $25 million.”

BSHC works as a core management center to provide outreach services. Its main role is to accept requests from the elderly, provide referrals to them and ensure recipients get everything they need from contracting vendors. “We have contracts from the state that gives us money to provide services, such as homemaking, meal preparation, home-delivery meals and laundry. We do not provide direct services. We provide case management,” claims George.

Today elderly living alone is a great issue for American families. “Many of our clients do not have a big extended family structure, like happened two generations ago,” says Anna Cole, the chief financial officer of BSHC.

Lack of resources, especially a lack of time, makes children with elderly parents apply for assistance from organizations like BSHC. George argues, “Children do want to help their parents or other relatives, do want to help their loves ones, but sometimes they can’t do it. You know they are working, they have their own children. Most of the time it’s not that children do not care about their parents, most of the time they just run out of resources.” 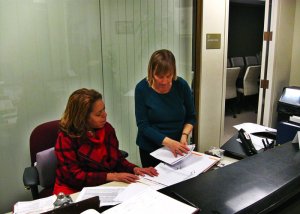 With the focus on people, BSHC tries to keep away from politics, even politics that impacts elders’ lives. Although the key motto of BSHC is people have a right for dignity, meaning the right to make their own choices, the organization did not endorse Question #2 during the election. “We did not take any position on death with dignity,” says George.

When asked about her personal perception of the death with dignity initiative, George says it is complicated and points to inaccuracy in the act. “My personal position was it was not well-written. I could support something but not that. It did not seem like there were enough safeguards in the way it was written.”